I am not a doormat! 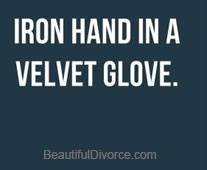 It is funny how when I say that I have a beautiful divorce, some people automatically believe that I just get on my back and let my ex-husband walk all over me, just for the sake of peace.

That could not be further from the truth. When married, it was fair to say that we fought for everything and about everything, there was no discrimination. But with the divorce, I learned to fight like never before. The difference? I learned which fight to fight. I learned to pick my battles to win my war and I stood tall and fought them.

How did I do that? Needs vs Wants. The heart before the ego. Long term before instant gratification.

What was important to me was first to make sure that my kids were covered, and that I also was covered to take care of them.

I left a lot of money on the carpet, and had many people (lawyers, judge, mediators) upset with me because I was not fighting to get more. What they did not understand is that the ‘more’ right now, was going to be a whole lot less later. I had enough.

I wanted to have a family relationship with my ex-husband, and trying to get more just to get more, would have destroyed what I was building for my family.

And indeed, I got so much more. I got to learn to stand up for what I believed was right. I learned to pick my battles and let go of the ones that really don’t matter at the end of the day. It is all about creating a win-win situation. It is about knowing where is the just milieu. And I got to have the beautiful divorced family that I visualized.

We are in a society of instant gratification. I want it right now, because I can and because I want to. That’s how most of us are now. I want to yell at you because it makes me feel better right now. I want more money because the law says so and I can.

The problem with the right now is that we completely dismiss the impact it has on the future and how it will shape it. We hear a lot, live in the present, not in the past, not in the future. That is true, but it does not mean that there are no consequences or ripple effect on what we are doing.

So, before you go fight your battle, ask yourself: Is this battle, the one I want to fight to win my war?