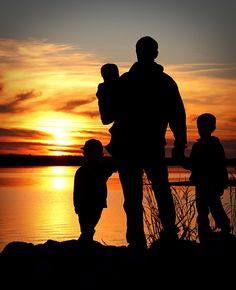 My kids need their dad. It is important to their development and their wellness. I want him to be the best dad he can be. Like many mothers, I used to be the one taking care of them, making sure they were eating right, taking them to sport, consoling them, petting them, guiding them through life, and so on. It was very hard for me to realize that I would not be that person 100% of the time anymore. I would only be with them half the time. How would he do? I had to let go of control, I had to let go of my worries. In order to let go, I had to feel that he was doing a good job. And in order to do that, I had to support him to be the best daddy he could be so my kids could flourish. Here are a few things I did to help him become a better dad:

1- Share what your kids say nice about him.
When the kids share a fun time with their dad, I write him and share with him what they said and I thank him for being a good daddy. That made him feel good, gave him the confidence and inspired him to do more. And it also creates a positive team spirit.

2- Focus on what he does right.
I knew he was going to make mistakes. Of course he would. I took care of my kids since they were born, how could he know what to do from day one? We learn by mistake, so I let him make them and did not say anything. I would only focus on what he was doing right. Such as: “Thank you so much for taking Sienna to swimming today, she loves it. Thank you.” And when he was forgetting to do something, I would just bite my tongue.

2a- If he would make the same mistake over, then I would first talk to the kids and teach them to teach him; tell them the conversation they need to have. Make them accountable as well for their lives; such as: “tell daddy to take you to your class 20 minutes before it starts.”
If that did not work, then I would approach him asking if I could support him. Ex: “Liam is telling me that he has not been at soccer last week, is there something I can help with to take him there?”

3- Thank him often
Regularly, I thank him for being such a good dad. If my kids are doing well, he must be doing something right too. After all, he has them half the time.

Those are only three things. Bottom line is to see everything that he is doing right with them and let him know how appreciative I am.

Feel free to add any tips on how to make the other parent be a better parent.