THE BOOGIE MAN AND MY KIDS 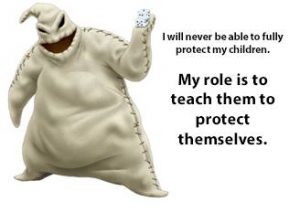 I went to a body safety (children sexual prevention) course offered by my kids’ school. I learned so much. I learned all the vocabulary and the signs and everything that I need to know about prevention.

We talk a lot about what our kids need to do. Be strong, we say. My body is MY body. But can we realistically believe that my 8 year old is going to be strong enough against a grown up man?
So, while I teach them about their body, I want to do more; I want them to learn prevention. I want them to stay away from them before they are under them.
I do not want to fix a problem, I want to prevent a problem.

After the workshop, after learning the grooming behavior (that’s how they get your kids), I started to wonder about a certain person in our lives that we know. He demonstrated many characteristics of grooming. I started to get a strange feeling in my belly. I went online and there he was, on the sexual offender list. At this point, I have no idea what he has done, and maybe that was a case of where he could have been sleeping with a minor while he was 18, who knows.
I wanted to know so I confronted him. I said, “I saw your picture on the sexual offender site. Can you please explain?” He told us his story. We decided that he was no longer going to see the children even if we felt he did not represent a real risk. But again, we cannot ever be 100% sure. He can suddenly be triggered and be attracted to my kid once s/he turns 15.
Him, or another man.

This is why they need the information. They need to learn to protect themselves. It is easier to run away when a person is far away, than when they are on top of you.
I will go through the signs of grooming with them. I will put it in their language so they can understand. I will then ask them if they can think of anyone who demonstrates those traits, and little by little, if they need help, I will guide them to that person. I will then teach them not to believe that they did anything wrong but just to be extra careful and aware of this behavior. This is what I am going to do.

What is happening here, is I want them to see that a grown up acting like a kid and wanting to have a relationship with them is a bit odd. It does not always mean that something is wrong, but it does mean to open your eyes a little bigger and be aware.
I will never be able to fully protect my children. My role is to teach them to protect themselves.